The opening of the Confucius Classroom: International speakers and Chinese music

Danish flags hung proudly at the entrance, as the handsome greeting party of Chinese students, dressed in traditional silk robes, welcomed the guests to the official launch of the Confucius Classroom at the International Business Academy in Kolding.

No fewer than 100 guests, representing at least 18 nationalities, were gathered at the event.

The purpose of the Confucius Classroom is:

The room buzzed with Danish, English and Chinese languages, underlining the fact that both the aim of the day and the atmosphere were very much international.

No fewer than 100 guests, representing at least 18 nationalities, had gathered under one roof at this opening reception at Ålegaarden. 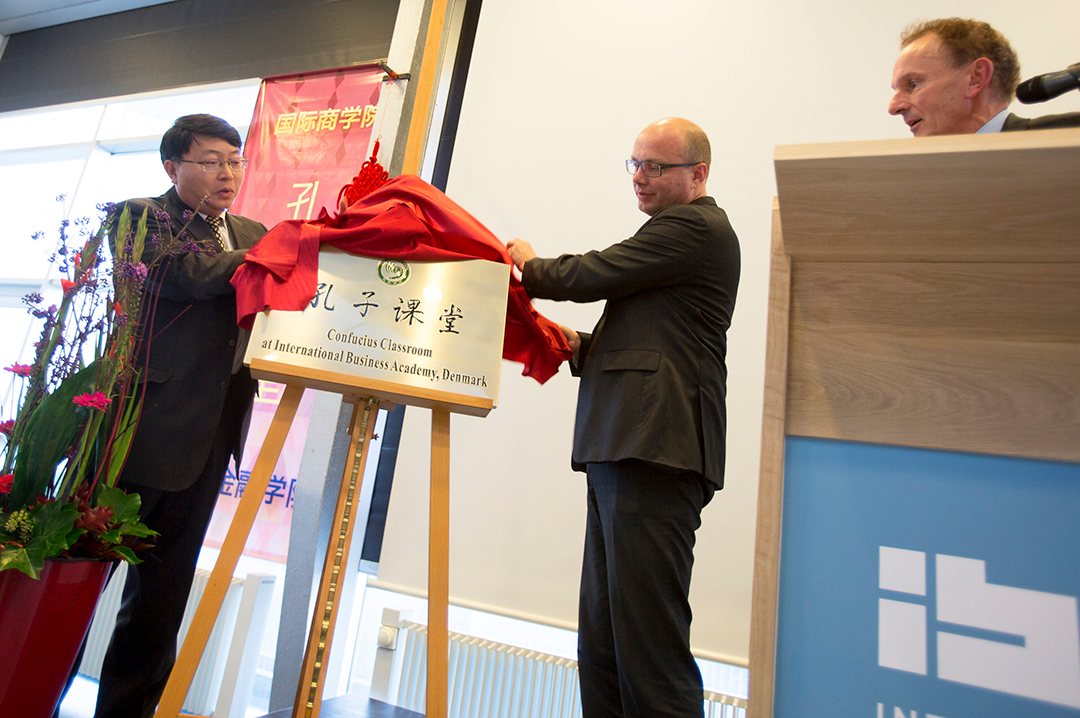 It was Denmark meeting China, and China meeting Denmark - and that’s exactly what the Confucius Classroom is all about: the new centre will serve to promote the Danish-Chinese collaboration within culture, language, education and business, in an international partnership with Shanghai Lixin University of Accounting and Finance. It will also be the epicentre of Kolding for cultural development and business-related collaboration between the two countries.

IBA president Niels Egelund began with an opening speech, in which he noted the huge international developments that IBA Kolding has undergone over the years:

“I don’t think too many people would have dreamt that, 25 years later, we’d be sitting here today with a room full of so many different nationalities, large companies and partner organizations. It is wonderful to see.”

He went on to outline the purpose of the Confucius Classroom as a skills and research centre, as well as a driving force for Danish-Chinese activities on a regional, national and international level. He has visited China himself on no less than eight occasions.

After the opening speech, two young female soloists - Yu Xiaoqian and Huang Lin - took to the stage to play some classical Chinese music on the traditional Chinese stringed instruments, the sanxian and the erhu. Both girls are from the Confucius Institute at the Royal Danish Academy of Music in Copenhagen.

Among the many distinguished guests from both Denmark and abroad was a delegation from the Chinese Embassy in Denmark - including general secretary Zhang Yun, who spoke warmly about the Danish-Chinese partnership.

Chen Jingving, vice president of collaborative partner Shanghai Lixin University of Accounting and Finance, echoed these sentiments. He spoke about global financial developments, and of the global education which is these days increasingly crucial.

“I wish you every possible happiness and success with the Confucius Classroom - and you are all very welcome at Shanghai Lixin University of Accounting and Finance,” he said.

Gail Xu Xiaoqing, as newly-appointed director, will be heading up the Confucius Classroom. Over the next two years, she will oversee the collaboration with Shanghai Lixin University of Accounting and Finance. 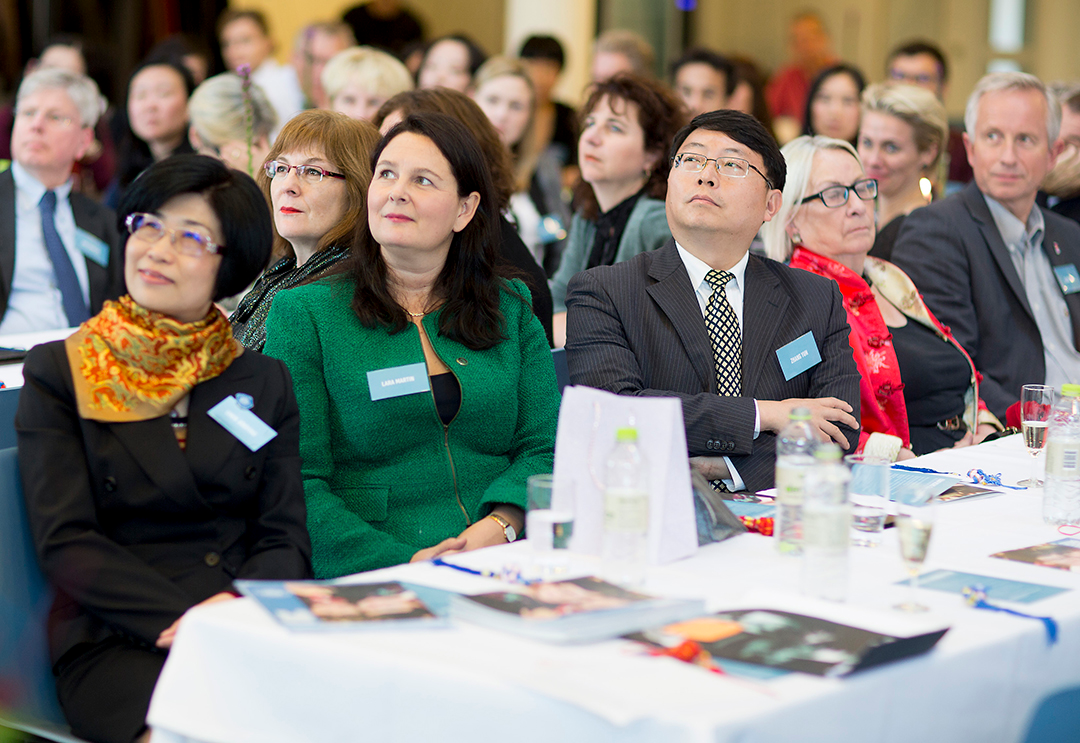 To the left: Gail Xu Xiaoqing, the Director at Confucius Classroom.
To the right: Jørn Pedersen, the Mayor of Kolding Municipality.

A baby is born

The Mayor of Kolding Municipality Jørn Pedersen also spoke at the event, both on behalf of the town of Kolding - now a proud owner of a Chinese research centre - and also in his own capacity as chairman of the IBA board.

He described the pivotal study trip to London almost three years ago, undertaken with IBA president Niels Egelund. It had really only been planned as a fact-finding trip to the London Confucius Institute - but it was to become the initial spark for subsequent, determined efforts to become approved and recognized as part of the international Confucius partnership and collaboration:

“A baby is born - and we are 100% behind it. We wish to work alongside local and regional businesses, in order to support commerce with China,” stated the mayor - who, along with Niels Egelund, has been one of the major forces behind the creation of the Confucius Classroom.

“It was only intended to be a trip that would bring us a bit of inspiration,” he said with a smile - “but Niels and I looked at each other on the flight home, and he said: "We should have one of these too."

Mayor Jørn Pedersen emphasized the fact that this is not something taken lightly by the board:

“Remember that this has been three years in the making. It really takes some effort to put a partnership like this in place. Even just securing the approval is a long process in itself.” 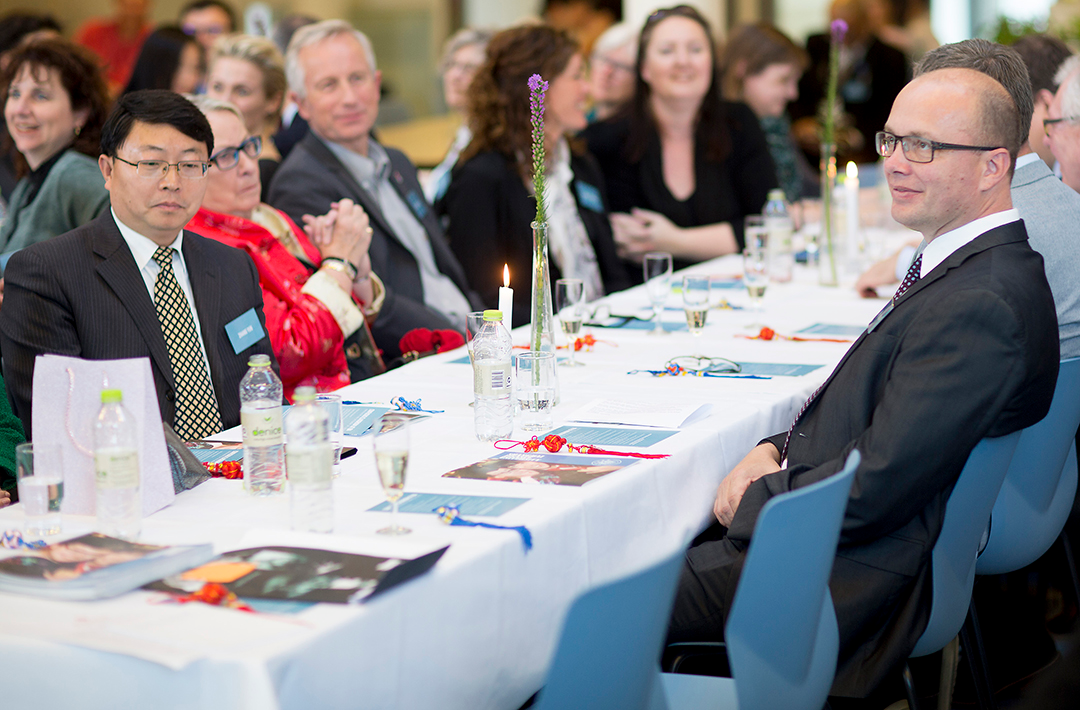 It was a very happy Niels Egelund who looked back over a well-attended and successful opening afternoon, before heading on to an evening dinner at Koldinghus:

“This is a confirmation that IBA is now, without question, a very international and widely-acknowledged institution… and I hope that this will help to open the doors at greater numbers of companies - both in terms of our students, and in terms of the fact that we are now a HUB; a hotbed and a driving force for international trade and collaboration. It helps to sharpen up our profile as a place of education here in the town, and it puts the international skills we have to offer on the map.”

There was every good reason to raise a glass of champagne yesterday - but Niels Egelund will not be resting on his laurels:

“It is now that the real work begins. Lots of relevant activities must be planned, and the budgets and catalouges have to be continuously approved by the HanBan Confucius Headquarters in Beijing.”