For the first time ever, United Arab Emirates have their own Ambassador in Denmark. Her name is Fatima Khamis Al Mazrouei.

On Monday the 13th of January she visited IBA.

All full time students at the IBA have the opportunity to spend a semester or a shorter period abroad.

We have a wide range of partnerships all over the world, both within the EU and outside of it.

Read about the exchange possibilities at IBA. 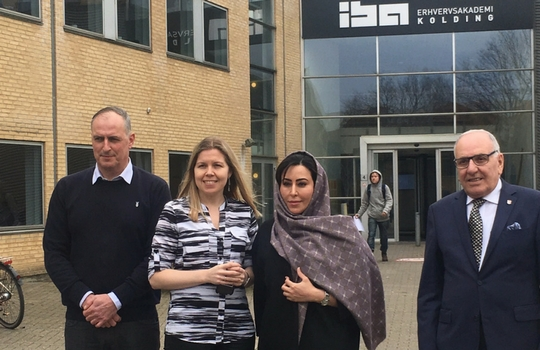 The ambassador of United Arabic Emirates, Fatima Khamis Al Mazrouei (in the middle) was welcomed by Ildikó Antal (blond hair) and Peter Lei (left) from IBA.

IBA wants to cooperate with UAE

United Arab Emirates (UAE) is one of the fastest growing economies in the world, due to its oil revenues. The official language is Arabic, while English is very commonly used for trade and education.

IBA’s President, Niels Egelund, hopes that the Ambassador will gain a good impression of IBA, and that this will be the start of some constructive collaborations between schools within the two countries. 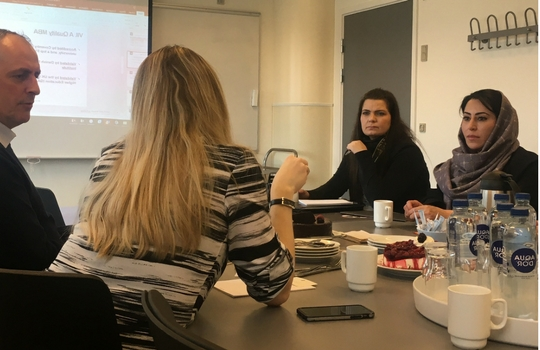 Hoping to exchange students in the future

- We would like to discuss the possibility of becoming a part of the official list of recommended universities. If IBA can be included on the list, we will be able to attract students from both Denmark and the United Arab Emirates, and it will make it possible for Danish students to go to Abu Dhabi or Dubai for a semester or two.

The Ambassador Fatima Khamis Al Mazrouei also met with the Mayor of Kolding, Jørn Pedersen, and with Business Kolding.

Read all about the possibilities to study abroad >>